In 2021 the Bank of Italy identified 50,563 counterfeit euro banknotes which had been withdrawn from circulation (-22.5 per cent compared to 2020). This is the lowest figure since 2002, when the euro first started to circulate.

The most counterfeited denominations continue to be €20 and €50 notes, accounting for more than two thirds of the total.

Worldwide, 347,000 counterfeits were withdrawn from circulation, representing an annual decrease of 24.6 per cent. This too is the lowest figure since 2002. Most counterfeits (95.4 per cent) were discovered in euro area Countries.

The Bank of Italy, the other National Central Banks in the Eurosystem and the European Central Bank work closely with Police Forces to constantly monitor counterfeiting activity. 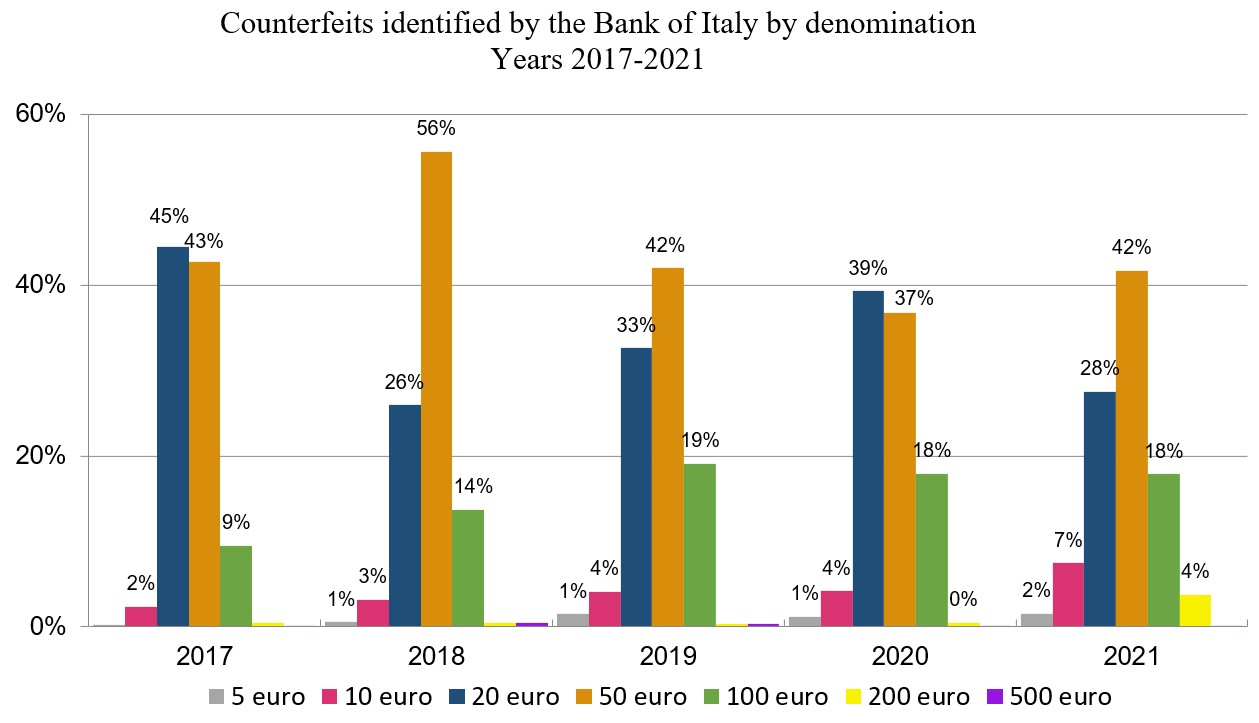 Counterfeiting, which is a crime under Italian law, is paid great attention by central banks since it could undermine the public's confidence in the currency if it is not kept under control.

The Bank of Italy cooperates with the other national central banks of the Eurosystem and the European Central Bank in the fight against the counterfeiting of banknotes. It also provides training on the recognition of counterfeit notes for Italian and foreign police forces and persons charged with handling large volumes of cash.

The continuous replacement of worn banknotes ensures that the cash in circulation is of a high quality and this makes it easier to detect and withdraw counterfeits.

To make the action taken to fight counterfeiting even more effective, the Eurosystem central banks have created a computerized system for the collection and monitoring of data on counterfeits (the Counterfeit Monitoring System) and organizational arrangements for bodies operating in each member state. The following are located within the Bank of Italy:

What to do if you have a suspected counterfeit banknote

A person who is doubtful about the legitimacy of a banknote should not try to spend it, because this would be a crime. He must have it examined by a teller of a commercial bank , Post Office or Bank of Italy branch.

If the teller thinks the note is a counterfeit, he or she must withdraw it from circulation and send it to the Bank of Italy's Head Office in Rome, where the suspected banknote National Analysis Centre (NAC) will establish whether or not it is a counterfeit.

When notes are withdrawn as suspected counterfeits, those who make the withdrawal draw up a report, a copy of which is given to the presenter of the note as a receipt. If the Bank of Italy finds the note to be legitimate, the presenter is reimbursed for the full amount with a BI cashier's cheque, otherwise the presenter receives nothing.

The Bank of Italy informs the entity that made the withdrawal (so-called "submitter") of the outcome of the examination.

Knowledge of the security features of banknotes is the most effective protection from counterfeit notes and the loss caused by accepting them.

Cash handlers (banks, Poste Italiane S.p.A. and other economic agents that engage in the sorting and distribution to the public of euro banknotes and coins as a professional activity) must withdraw from circulation banknotes that are not classified as genuine following authenticity checks performed automatically or, when permitted, manually, and consign them to the branches of the Bank of Italy.

The suspect banknotes must be handed over immediately and in any case not later than the twentieth business day following that on which they were received.

The consignment of the banknotes must be accompanied by the record of withdrawal containing the information referred to in Annex 5 of the Order of the Bank of Italy dated 22 June 2016.

The list of branches to which suspect counterfeit notes can be sent or delivered is published here.

The European Central Bank has set up the website "Euro Check Web Site" that provides information on counterfeit euro banknotes. Access to the site is reserved to users belonging to categories whose work makes this information necessary. These users must be designated by the organization they work for (professional cash handlers, law enforcement agencies, manufacturers of banknote handling machines, and must be specifically authorized by the NCBs, the ECB or by Europol.

The service makes it possible to have suspected counterfeit notes examined; if they are found to be genuine, at the end of the examination reimbursement is given.