From the 1950s to Maastricht

For Italy the 1950s was a time of sustained economic development in a context of monetary stability. The choice of international opening, which introduced salutary competitive stimulus into the economy, was consolidated by membership in the European Economic Community (1957) and the introduction (1958) of convertibility of the lira into other currencies for non-residents (external convertibility).

The Bank, headed by Donato Menichella (who had succeeded Einaudi in 1948, when the latter became President of the Republic), aimed to maintain the long-term conditions for investment. It took direct interest in problems of economic development and of Southern Italy without ever abandoning monetary control. The instruments of monetary policy consisted of discount rates and central bank advances - which, however, held stable for eight years from 1950 to 1958 - and control of credit, in part through moral suasion. Periodically, excess liquidity was mopped up via bond issues. 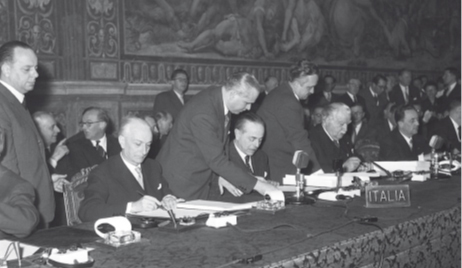 Banking supervision was directed primarily to avoiding the repetition of episodes of asset illiquidity. An effort was made to align the structure of the banking system with industry: hence the encouragement of smaller banks, presumed to be more closely tied to small businesses (localism). In 1960 Guido Carli was named Governor of the Bank. In the years that followed, the economic structure of the country was gradually transformed. More and more the role of the credit system was to reallocate resources between consumption and investment and between the public and private sectors. From the mid-1960s onwards monetary policy was oriented to stabilizing security prices, to facilitate the placement of issues and thereby encourage investment.

The Research Department perfected its analytical instruments, most notably with the construction of the Bank of Italy's econometric model and the realization of the "financial accounts".

As regards the credit system, for the first time since the 1930s banking mergers were encouraged, in order to enhance technical efficiency, but definitely excluding a return to universal banking. The Central Credit Register was established.

The 1960s ended in the midst of serious economic difficulties. The end of the Bretton Woods System (August 1971), the switch to floating exchange rates and the sharp rise in oil prices ushered in a long period in which two evils previously considered antitheses coexisted: stagnation and inflation.

Inflation in Italy was notably higher than the average for the other industrial countries. Between 1973 and 1984 the rate was never below 10 per cent. In addition to world price rises, Italian inflation had major domestic causes: severe labour market tensions, an increase in public expenditure without a corresponding increase in revenue and lack of competition. An important role was also played by the removal of the discipline of fixed exchange rates.

The policy of stabilizing securities prices became too onerous and was abandoned. In order to sustain investment and at the same time keep a check on domestic demand, while containing rises in interest rates, in 1973 administrative credit control measures (a ceiling on bank lending and portfolio constraints) and foreign exchange controls were introduced. Monetary policy in Italy, as in the other industrial countries, tended to be restrictive and to focus on explicitly announced medium-term target aggregates (total domestic credit). 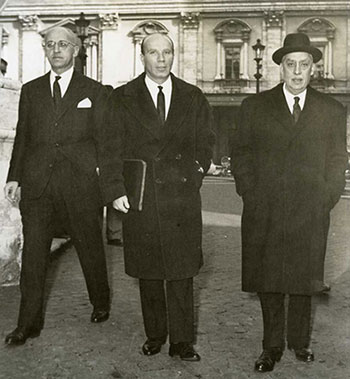 In 1975 Carli left the governorship to be replaced by Paolo Baffi, who had been Director General since 1960. During the foreign exchange crisis of 1976 the Bank made the lending ceiling more constraining and tightened foreign exchange controls to make the restrictive measures more effective.

The Bank repeatedly underscored the costs and limitations of this set of policy tools. Action was begun to enhance the ability to conduct monetary policy through the market, especially via the buying and selling of securities (open market operations). To this end, in 1975, the first steps were taken to create a true money market, with procedural changes in the issue of Treasury bills and a reform of compulsory reserves.

In December 1978 Italy joined the European Monetary System, negotiating a broad fluctuation band for the lira of 6 per cent above or below the central rate, while the other participating countries had a narrower band of plus or minus 2.25 per cent, because Italy's inflation differential, though narrower, was still substantial.

Supervisory action sought to encourage the capital strengthening of banks, to improve their by-laws and organization, and to broaden the scope for competition. In the second part of the decade on-site inspections became more extensive and analytical techniques were perfected. To meet the growing need for international supervisory cooperation, the Basel Agreement was signed in 1983.

In 1979 the leadership of the Bank of Italy was struck down by a judicial initiative regarding banking supervision. Although the action subsequently proved to have been completely groundless, Governor Baffi was incriminated and Deputy Director General Mario Sarcinelli arrested. The events were a difficult test for the Bank. Thanks to the general demonstration of solidarity on the part of qualified opinion, both Italian and international, and the independence and prestige of the Bank and its staff, the institution weathered the crisis.

Paolo Baffi chose to resign in October 1979 and was replaced by Carlo Azeglio Ciampi, who had been appointed Director General in 1978 following a long career in the Bank.

The second oil shock of 1979-80 again caused prices to rise, but three factors helped foster a process of disinflation and the restructuring of industry. In 1979 the European Monetary System began operating, accompanied by an unaccommodating monetary policy stance, which reinforced the real exchange rate of the lira. In 1981 the Bank of Italy gained full autonomy to decide whether or not to purchase Treasury bills not taken up by brokers at auctions (the so-called "divorce").
Wage moderation was produced by the surge in unemployment and the weakening of wage indexation. Real interest rates returned to positive values.

The drive begun in the second half of the 1970s to enhance the effectiveness of monetary control through market instruments was continued. At last, with the introduction of an efficient auction system for issuing Treasury bills and a functioning interbank deposit market, a true money market came into being. In 1987 the inflation rate reached a low of 4.7 per cent and in 1990 the lira moved into the "narrow band" of the EMS. However, inflation turned up again to 6.5 per cent in 1990, owing among other things to unresolved structural problems. The deficit of the current account of the balance of payments became worrying and investments declined. The rehabilitation of the Italian economy, that is, was still partial and fragile.

The Single European Act in February 1986 laid down the stages of the process for the removal of the remaining trade barriers dividing EU national markets. Six years later, in February 1992, the Treaty of Maastricht was signed, forming the basis for the single currency and the European System of Central Banks. In 1990 the completion of liberalization had brought an end to foreign exchange controls, which had been in place in Italy, in one form or another since 1934. This facilitated the international integration of the Italian economy and the financial system.

In the 1980s the supervision of the Bank of Italy was extended to non-bank intermediaries, albeit only for matters impinging on the stability of the financial system. The Bank began the transition from "structural" supervision (which used powers of authorization to shape the structure of system) to "prudential" supervision, based principally on general rules of conduct. In 1990 three fundamental laws were passed: one on commercial banks and groups (called the "Amato-Carli" law), one on securities business, and one on safeguarding competition. The first established a level playing field for bank operators, specifying the joint stock company as the general model for banking business, laid a basis for the privatization of banks, and regulated credit groups. The second regulated securities intermediaries and stock markets. The third introduced antitrust principles and instruments.

During the same years the Bank of Italy set the objective of improving the integrity and efficiency of payments services. The national clearing system and the transactions on banks' accounts at the Bank of Italy were completely computerized. The screen-based Interbank Deposit Market (Mercato Interbancario dei Depositi - MID) was launched.