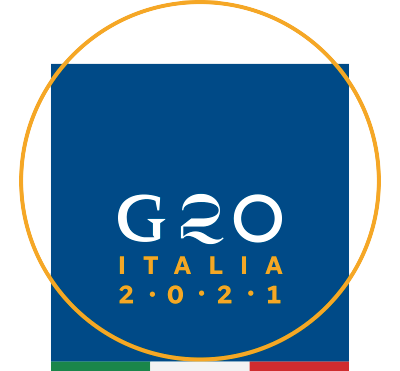 At a time when a collective effort is crucial for starting again after the unprecedented impact of the COVID-19 pandemic, Italy took on the Presidency of the G20, the main forum for global economic and financial cooperation, on 1 December 2020. The pandemic crisis highlighted the complexity of the common global challenges that require increasingly closer cooperation between countries.

The Group of 20 (G20) is a forum for dialogue and the exchange of information between the world's major economies. G20 was established in 1999 and is currently composed of 19 countries (Argentina, Australia, Brazil, Canada, China, France, Germany, Japan, India, Indonesia, Italy, Mexico, Russia, South Africa, Saudi Arabia, South Korea, Turkey, the United Kingdom, and the United States) and the European Union. Spain is also invited as a permanent guest. International organizations such as the International Monetary Fund, the World Bank, the OECD, the Financial Stability Board and the United Nations also participate. The Presidency may decide to invite a few additional countries to ensure that the group is more representative, geographically speaking. The G20 has become the main forum for international economic cooperation since the 2008 global financial crisis and has raised the level of participation to include Heads of State and Government.

The annually rotating Presidency proposes priorities and coordinates activities between the members of the group with the assistance of its predecessor and its successor.

The priorities for Italy's G20 Presidency

The core of the 2021 agenda will be the need for closer coordination of economic and fiscal policies at global level to deal with the COVID-19 emergency, with the aim of reaching a consensus on a coordinated budgetary stimulus to manage the difficult transition from the second wave of the epidemic to the recovery and revival of the economy. For this reason, we are taking the lead in ensuring a swift international response to the pandemic - to guarantee equal and worldwide access to diagnoses, treatment and vaccines - while building up global resilience to future health-related shocks. It is necessary to ensure a rapid recovery that focuses on people's needs, paving the way for an ambitious, effective and sustainable relaunch. This is a prerequisite for a lasting prosperity, also ensured by the use of the main drivers of growth and innovation. We are working to overcome the digital divide and make digitalization an opportunity for everyone, to increase productivity and to leave no one behind (for more information click here).

The role of the Bank of Italy