The 1893 Banking Law and the Giolitti era

The first period in the history of the new bank runs from its inception in 1893 to the explicit declaration of its public nature, in 1936.

The 1893 Banking Law (Law 449 of 10 August 1893), instituting the Bank of Italy was fundamental. It redefined banknote circulation to base it on gold (more precisely: 40 per cent of notes issued had to be covered by gold reserves) and placed an absolute limit on issues. It created the conditions for restoring the health of the issuing banks. It began the transition towards a single bank of issue. And it established rules whereby the public interest took precedence over the profits of private shareholders (for example: government approval for the appointment of the head of the Bank of Italy - the Director General - and for changes to the discount rate).

During these years Giuseppe Marchiori, Director General from 1894 to 1900, steadily emarginated private shareholder interests and affirmed the Bank's pursuit of public purposes. Yet the Bank remained a private company, issuing banknotes under concession.

A very significant role in the development of the Bank was played by Bonaldo Stringher, who was appointed Director General in 1900. In the Giolitti era the Bank was able to reconcile (given a favourable economic climate) financial and exchange rate stability with support to economic activity. In 1902 the old parity between the lira and gold was reached; from then on Italy behaved as if it adhered to the gold standard, but, having learned from previous crises, did not officially declare the convertibility of the currency. In 1906 the Bank of Italy conducted the fair conversion of pre-existing irredeemable government bonds. Through this success the Bank confirmed its role as banker and hence as advisor to the government, in addition to the role of treasurer.

In parallel with the economic revival and industrialization, the credit system had changed: during the crisis of 1893-94 - which saw the failure of the largest two industrial credit banks - a new system evolved in which the bulk of credit business began to pass from the three surviving banks of issue (Banca d'Italia, Banco di Napoli and Banco di Sicilia) to the large mixed banks recently founded (Banco di Roma, Banca Commerciale Italiana and Credito Italiano).

In 1907 the Bank of Italy intervened effectively to prevent a serious financial crisis, reinforcing its role as lender of last resort and consolidating its reputation. To facilitate this work the system of monetary circulation was made more flexible with a law passed at the end of the year. The need for supervision of the banking system began to be felt.

On the eve of the World War I the Bank of Italy held a central position within the national financial system, thanks to the importance of its credit for the economy, its action to guarantee financial stability, its consolidation of the gold reserve and its assistance to the Treasury in public debt management.

During World War I the Bank assisted the Treasury massively: with direct credit, with help in arranging domestic war loans and with the management of foreign financial operations. The link between the lira and gold was abandoned and the state monopoly of foreign exchange was instituted.

With war's end, problems of reconversion to civilian uses threw many sectors of industry into crisis, and with them the credit institutions that had financed them, to the point of causing major banking failures. The Bank of Italy, with government approval, intervened with massive salvage operations. The foreign exchange monopoly was ended, but in the new circumstances a return to monetary normalcy was impossible. The existing instruments for the control of the money supply proved to be totally ineffective. Within the country and at international level, the question under debate was how to return to a system based upon gold. Italy took a conservative stance, in favour of the classic gold standard.

In a slightly inflationary situation the Fascist government revalued the lira in 1926, thereby deflating the economy. As part of the monetary stabilization plan and the return to the gold standard (effected by the Bank of Italy notwithstanding Stringher's doubts regarding the strong risk of deflation), within three years important reforms were made. The Bank of Italy was given the monopoly on banknote issue and assigned to manage the clearing houses, central nodes of a modern payment system. A law was enacted to protect savings. Banks' new special obligations were established, including a minimum capital requirement. The Bank of Italy was given new powers of control, the kernel being supervision of the banking system. The reforms were completed in 1927-28 with the fixing of a new gold parity for the lira and the re-establishment of convertibility into gold or convertible foreign currency (gold exchange standard), the introduction of the obligation to maintain a gold or hard currency reserve of at least 40 per cent of the money in circulation, and the redefiniton of relations with the Treasury.

As a result of these provisions, the Bank, abandoning its old role of "bank of issue", became a true central bank and overseer of the credit system. The Bank's fundamental character as a public institution was reinforced. In 1928 a new Statute was approved, creating the post of Governor at the top of the Directorate (composed of Governor, Director General and Deputy Director General). Responsibility for setting the discount rate passed from the Executive Board to the Governor, still subject to government approval.

The Depression and the 1936 Banking Law 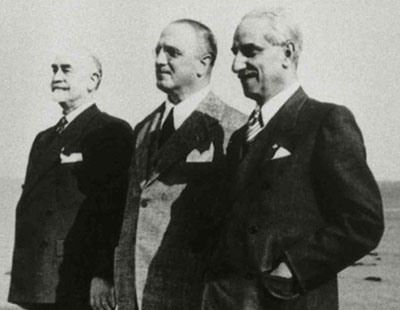 After Stringher's death in 1930 the Governorship passed to Vincenzo Azzolini, who arrived from the Treasury.

At the depth of the Great Depression, the devaluation of sterling (in September 1931) and most other currencies was tantamount to a further revaluation of the lira. The deflationary effect of Italian policy was accentuated, with severe repercussions on economic activity and the financial system. The State and the central bank saved the major commercial banks from collapse, their assets swollen with ever more devalued equity holdings. The Bank of Italy found itself with severely illiquid assets, and was thus unable to conduct operations. The response was first the creation of Istituto Mobiliare Italiano (IMI) to provide medium and long-term financing and then the Institute for Industrial Reconstruction (Istituto per la Ricostruzione Industriale - IRI), which purchased equity holdings of the ailing banks and took a controlling stake in the banks themselves. In the mid-1930s the tensions that would lead to the World War II were foreshadowed in the monetary and currency sphere with the de facto termination of the convertibility of the lira and in the suspension of the gold reserve requirement (which was never to be reinstated).

In the context of preparations for war (the invasion of Ethiopia started in 1935) and under IRI, the Banking Law was drafted. The first part of the Law, which is still in force, defined the Bank of Italy as "a public law institution" and entrusted it definitively with the function of monetary issue (no longer just a concession); individual shareholdings were expropriated and equity was reserved to financial institutions of public relevance; the Bank was prohibited from discounting bills itself to non-banks, underscoring its function as banker to banks. A second part of the law (repealed almost completely in 1993) concerned credit and financial supervision, totally revamping the credit system via a separation between banking and industry and between short- and long-term credit; it determined that banking was an activity of public interest; it concentrated supervision in the Inspectorate for the defence of savings and the exercise of credit (a newly created state body), chaired by the Governor and using resources and personnel of the Bank of Italy, but directed by a ministerial committee chaired by the Prime Minister.

Aware of the new developments in economics and the challenge posed by a world in the throes of violent change, Governor Azzolini initiated the creation of a modern research service, taking on professional economists.

At the end of 1936 the long-awaited devaluation of the lira stimulated economic recovery and improved the balance of payments. At the same time, by a simple ministerial decree, all limits on State borrowing from the Central Bank were abolished. The autonomy of the Bank was at its nadir.