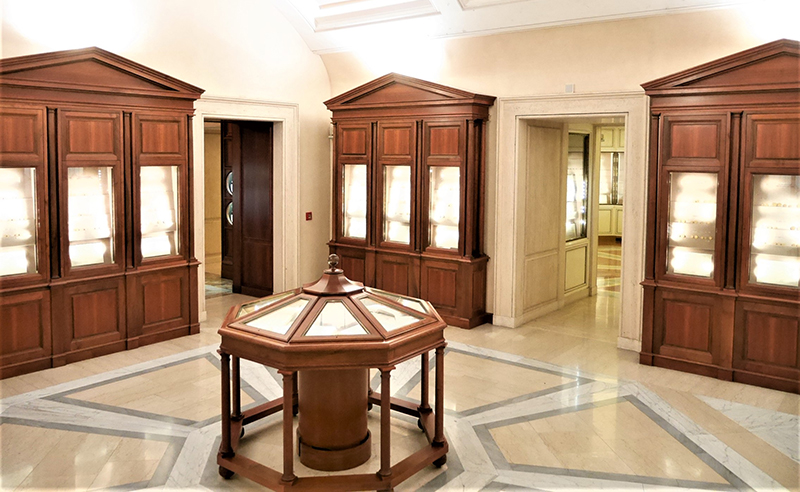 This display case contains a large collection of gold coins minted in Italy and abroad in modern times, from the Napoleonic era to the beginning of the 20th century. We have selected important coins from this collection in order to illustrate through them the different trajectories of many of the gold currencies in the modern world and the fundamental monetary policy principles of the modern states.

Display case 26 - THE FRANC AND THE LIRA Napoleonic era

The franc germinal and the Italian lira

In 1793 during the French revolution, France adopted a new system of weights and measures based on a centesimal subdivision. With Law 17 Germinal Year XI (April 1803), Napoleon codified the reforms planned under the Convention and the Directory and placed the silver franc at the centre of the French monetary system; the silver franc was subdivided in centesimals, weighed 5 grams, and had a millesimal fineness of 900. Gold would be used for 40- and 20-franc coins; silver would be used for 5-, 2- and 1-franc coins as well as for 50-cent coins and 25-cent coins, and had a gold to silver ratio of 1 to 15.5. The reforms were extended to the Kingdom of Italy by Decree dated 21 March 1806. The new currency, which had the same characteristics as the French franc, was called the Italian lira.

Display case 27 - THE ITALIAN LIRA after the Congress of Vienna

The new lira of Piedmont

Victor Emmanuel I, whose kingdom was restored after the Congress of Vienna, was compelled to officially adopt the lira imported from France as the Kingdom's official currency after a failed first attempt at reviving the old currency. The new lira of Piedmont contained 5 grams of silver with a millesimal fineness of 900 (Royal Patent dated 6 August 1816) (see photo no. IV.4).

The coins of the Kingdom of Italy

On 22 June 1816, in approving the reform of the monetary system, the British Parliament declared that only gold could serve as a basic unit of value and as legal tender for the payment of any amount. With regard to gold coins, the 'sovereign' coin was issued; with regard to silver, the 'crown' coin and its subdivisions.

The Italian engraver Benedetto Pistrucci, having been invited to work in the London mint, designed the new coins which depicted the image of Saint George and the dragon, a coin which has enjoyed long and unparalleled success (see photo no. IV.12 F and no. IV.12 B).

In order to provide the British empire with sufficient currency, Queen Victoria (1837-1901) opened new mints in India, Canada and Australia. The London mint subcontracted part of its production to the Heaton Mint in Birmingham, which used the letter H as a mintmark .

The problem of the gold standard in Europe

Between 1871 and 1873 even Germany, Denmark, Sweden and Norway converted to the gold standard.

In 1874, the countries in the Latin Monetary Union - France, Italy, Switzerland, and, from 1868 Greece - decided to temporarily limit the quantity of 5-franc silver coins due to difficulties in keeping the gold to silver ratio unchanged following changes in the international metal market. The Union definitively discontinued the coin in 1878. In France, the coining of gold remained unchanged under the Third Republic until the onset of the war in 1914. In 1928, it attempted to return to gold with a 100-franc coin, but it was never actually issued into circulation.

Spanish currency in the 1800s

In Spain, the French occupation and then the return of legitimate sovereigns resulted in a state of great confusion with regard to currency, a matter which the authorities tried to resolve on multiple occasions.

Isabella II, after an initial attempt at reorganizing the country's monetary system with, among other things, the creation of a 100-real gold doubloon in 1848, adopted the 'escudo' system with centesimal subdivisions in 1864. Gold coins were issued in denominations of 10, 4 and 1 escudos. In 1868 Spain adopted a system that was similar to that of the Latin Monetary Union. The basic unit was the silver peseta in 100 centimos with a value, weight and fineness that equalled that of the French franc.

On 23 December 1865 in Paris, the countries of Italy, Belgium, France and Switzerland signed an agreement that called for the adoption of a single common currency based on gold and silver coins that could freely circulate within the countries in the Union (see photos no. IV.18, no. IV.19, no. IV.20 and no. IV.21).

In Italy, the Convention was ratified by sovereign letter dated 2 June 1866.

By Declaration dated 26 September 1868, Greece was admitted in the Union (see photo no. IV.22). Other requests for admission, such as those submitted by Spain, by some North American countries and by the Papal States, were denied.

With regard to the Papal States, the negotiations, which were carried out by Cardinal Antonelli, brought an end to the temporal power of the papacy (1870).

While not actual members of the Union, other countries, like Serbia and Montenegro, aligned their monetary systems to the one adopted by the Union.

THE ERA OF THE GOLD STANDARD (Display cases 35-37)

In 1871 the Confederation of German States adopted the gold standard (see photo no. IV.25). The guiler, the thaler and their fractional coins were replaced by the German mark which consisted of 100 pfennig. The thaler, however, was worth 3 marks and continued to be used until 1907, when it was removed from circulation.

In 1917 the last series of gold coins was placed in circulation. Starting in 1920, the 25 and 10 øre coins were minted in cupronickel.

In 1931, after Denmark's suspension of the gold standard, the Scandinavian Monetary Union essentially dissolved.

Beginning in 1857, the basic unit in the Austrian monetary system was the silver florin, which was divided into 100 kreutzer. Gold coins denominated in 4, 5, 6, 7, and 8 florin also bore their value in francs (Imperial Patent dated 9 March 1870). With Royal Decree 57 dated 12 February 1871, they were recognized as legal tender in Italy.

The Hungarian florin differed from its Austrian counterparts only in its reverse, which bore the Hungarian coat of arms instead of the eagle, and in its inscription.

In 1892 Austria and Hungary also adopted the gold standard, based on the Austrian krone and the Hungarian krona, divided into 100 hellers or fillers, respectively.

In the first year of King George V's reign (1911-1935), the production of gold coins, minted with a millesimal fineness of 917, was as prolific in England as it was in its colonies.

The coins that were minted most were the 1 sovereign and the ½ sovereign coins (see photo no. IV.32); there was a more limited production of 5 and 2 sovereign coins. The coins were the same across all denominations: the obverse contained a portrait of King George, the reverse an image of St. George designed by Benedetto Pistrucci. In 1925, after the crisis that struck during the First World War, there was a brief recovery in the issuance of gold sovereigns.

Display case 39 - THE COUNTRIES OF THE 'GOLD BLOC'

In the period between the First and Second World Wars, both domestic and international markets were severely imbalanced. Most of the countries involved in the conflict lacked the conditions necessary to maintain the gold standard. In September 1931, England suspended the convertibility of the sterling into gold. Between 1931 and 1940, the most important currencies of the world abandoned the gold standard. The only holdouts, at least until 1936, were the countries of the gold bloc: France, Belgium, the Netherlands, Switzerland, Italy and Poland.

Display case 40 - THE COUNTRIES OF THE GOLD BLOC

The Italian lira in the period between the two wars

By decree issued on 21 December 1927, the Italian government decided to end the compulsory circulation of banknotes and required the Bank of Italy to convert its own banknotes, at its headquarters in Rome, into gold or into the currency of foreign countries whose banknotes were convertible into gold. On 27 December 1927, with Royal Decree 2325, the value of the lira was set at 0.079 grams of gold (see photo no. IV.45). Royal Decree 1745 of 5 October 1936 lowered the gold content to 0.046 grams, devaluing it by about 41 per cent. After a strenuous defence of the lira, even Italy ultimately had to further reduce the gold content of its currency in order to remain aligned with the other currencies in the gold bloc.