The TARGET2 balance and capital flows: an update

The changes in the net positions of euro-area National Central Banks (NCBs) within the TARGET2 payment system (TARGET2 balances) reflect each country's net inflows/outflows of liquidity as a result of the cross-border transactions carried out in this system by NCBs or by banks, in their own name or on behalf of customers. The balance can be seen as the offset entry to all the commercial and financial transactions between residents and non-residents; accordingly, using the balance of payments' accounting identity makes it possible to highlight the main types of foreign transactions linked to such changes.

The analysis of the latest data on Italy's balance of payments updates the situation presented in a previous opinion and provides the following evidence.

In 2018 two main factors had a negative effect on the TARGET2 balance:

These capital outflows were partly offset by inflows deriving from the current account and capital account surplus, which remained high (€44 billion, or 2.5 per cent of GDP), and by the increase in resident banks' net foreign funding in the form of loans and deposits (€53 billion).

This last point requires some clarification. Resident banks' funding abroad takes place via bilateral trading with foreign counterparties and on the MTS repo market, where overnight repos in government securities are traded. A large share of transactions on this market are through central counterparties that interpose themselves between the two parties to the transaction, acting as buyer to the seller and as seller to the buyer, thereby mitigating counterparty risk and protecting themselves against the risk of either party defaulting by acquiring adequate guarantees. Italy's central counterparty is the Cassa di Compensazione e Garanzia, which is a non-bank financial intermediary; the repos it brokers are therefore recorded in the balance of payments (see the Table 'Other investment: liabilities'; TBP60270 in the Statistical Database) in the section 'other sectors' (which includes non-banking financial intermediaries) rather than in that of the banks. They must be taken into account for a correct and thorough calculation of the Italian banking sector's net foreign funding in the form of loans and deposits. Roughly €43 of the €53 billion increase in Italian banks' foreign debtor position in 2018 in the form of loans and deposits can be attributed to central counterparty repo transactions.

As a result of these capital flows and the inflows linked to current accounts, in 2018 the Bank of Italy's TARGET2 liabilities increased by €43 billion (see the table below, where the balance of payments data have been re-aggregated to show the main counter-items of the changes in the TARGET2 balance). The increase in the TARGET2 debtor position mainly occurred in May and June, in conjunction with the tensions observed in Italy's financial market.

The TARGET2 debtor position has essentially stabilized since September, standing at €482 billion at the end of January 2019; contributory factors include more relaxed conditions on the government bond market and a significant attenuation of capital outflows. 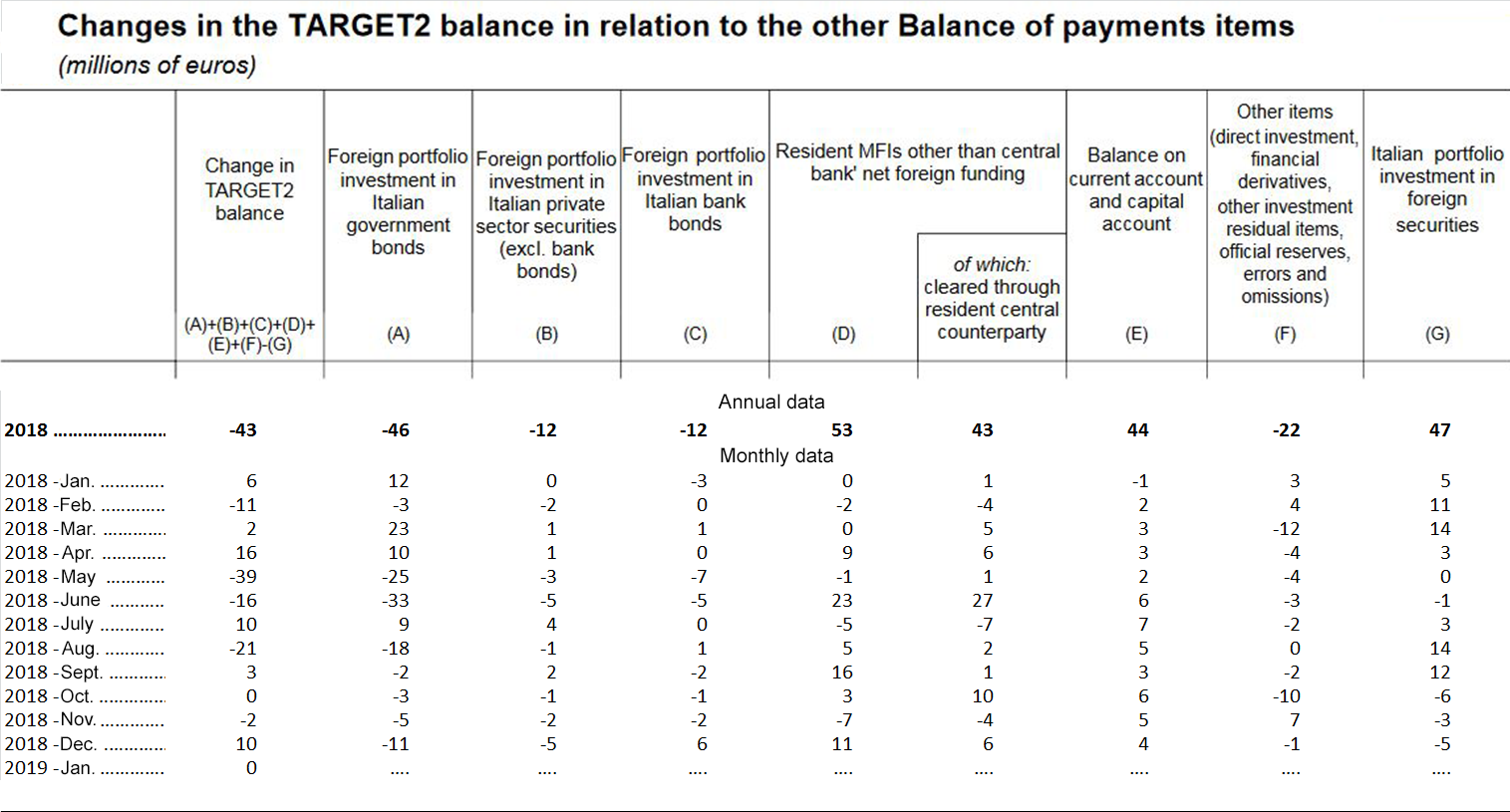 Source: Bank of Italy. Data in billions of euro. Note: a negative value for the changes in the TARGET2 balance indicates an increase in the Bank of Italy's TARGET2 liabilities. For further information, see the publication 'Balance of Payments and International Investment Position' (Notice and Table 7); the data can be downloaded from the Statistical Database (Table TBP60200).