Non-performing loans (NPLs) are exposures to debtors who are no longer able to meet all or part of their contractual obligations because their economic and financial circumstances have deteriorated.

The deep and prolonged recession that has hit the Italian economy and lengthy credit recovery procedures have contributed to the high volume of NPLs in Italy's banking system.

The Bank of Italy believes that the problem of NPLs in Italy's banks is serious but manageable, that it must be properly defined and dealt with, and that it is wrong to call it an emergency for the banking system as a whole.

The definitions of NPLs adopted by the Bank of Italy have been harmonized within the Single Supervisory Mechanism (SSM) and meet the European Banking Authority (EBA) standards published in 2013. Adopting the EBA harmonized definitions did not change the NPL aggregate, as it was basically aligned with the definitions already in use in Italy (see p. 27 of Financial Stability Report, 2, 2014). Nonetheless, it was decided to maintain greater depth of detail in the Italian statistics and to continue to update the time series for the NPL subcategories used in the past. This means that in Italy it is possible to measure the subset of NPLs resulting from more serious situations. The three subcategories of NPLs are 'bad loans', 'unlikely-to-pay exposures' and 'overdrawn and/or past-due exposures' (see Circular 272).

Last December NPLs net of write-downs amounted to €173 billion, of which €81 billion were classified as bad loans, €85 billion as unlikely-to-pay and €7 billion as overdrawn and/or past-due.

The economic crisis and the growth of NPLs

The NPL problem at Italy's banks is largely the result of the prolonged recession that has hit the Italian economy in recent years and of lengthy credit recovery procedures. The double-dip recession that struck Italy between 2008 and 2014 (Figure 1 - Panel A) severely impaired Italian banks' balance sheets and loan quality. It had two distinct phases. The Italian banking system reacted relatively well to the 2008-09 recession (phase one of the financial crisis), triggered by the collapse of the US subprime mortgage market and the attendant structured products crisis, to which Italy's banks, unlike their European counterparts, were little exposed. However, the deterioration in customers' economic and financial circumstances did lead to a significant increase in the flow of new NPLs (Figure 1 - Panel A) and in their stock (Figure 1 - Panel B). Phase two of the financial crisis began in the second half of 2011 with the Italian sovereign debt crisis. With the new recession, customers' ability to repay debt was further diminished, leading to a fresh rise in the rate of new NPLs and a further increase in their stock.

It is also interesting to note, as a recent analysis conducted by the Bank of Italy has found, that the supply of bank loans to Italian firms between 2008 and 2015 was not correlated to the high stock of NPLs. The negative correlation between NPLs and credit growth is mainly attributable to changes in the economic and financial circumstances of firms and to the contraction in their demand for credit (Questioni di economia e finanza (Occasional Papers), 374, March 2017). 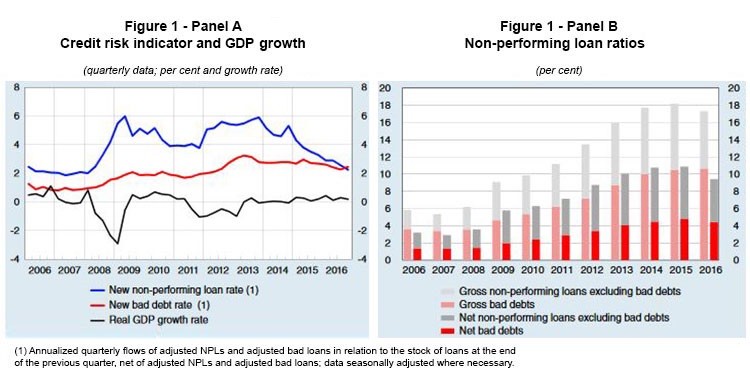